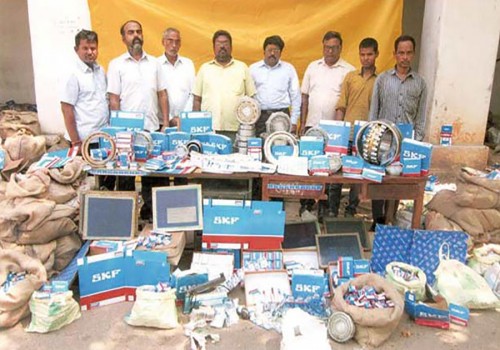 The Central Crime Branch of Greater Chennai Police on Thursday busted a fake ball bearing racket operating out of Broadway. They seized Rs 3 crore (30 Million Indian Rupee) worth fake ball bearings which were being sold under the brand name of the Swedish firm SKF.

The CCB team has also arrested eight persons, including two brothers who were masterminded the racket. According to the police, the brothers purchased cheap quality ball bearings from Mumbai and then repackaged them as SKF bearings. They had forged the seals and other imprints to sell their wares as genuine products, the police said.

A vigilance team from SKF, which supplied bearings to industries, auto majors and ship building units, had lodged a complaint with the city Commissioner of Police TK Rajendran alleging that counterfeits of their products were being sold widely in Chennai, allegedly by their own dealers. The company in-house team had started an investigation after they received several complaints regarding the quality of their products from customers. Upon examining the bearings, they found them to be duplicate.

The complaint was then forwarded to the CCB following which CCB deputy Commissioner Jayakumar formed a special team to investigate the case. The team then started monitoring the registered dealers of SKF and found out many shops in Lingu Chetty Street, Thambu Chetty Street and Angappanayagan Street in Broadway had been selling fake bearings. Police then zeroed in on warehouse owned by brothers Santhosh Kumar Jaiswal (42) and Dilip Kumar Jaiswal (48) and seized several fake SKF bearings.