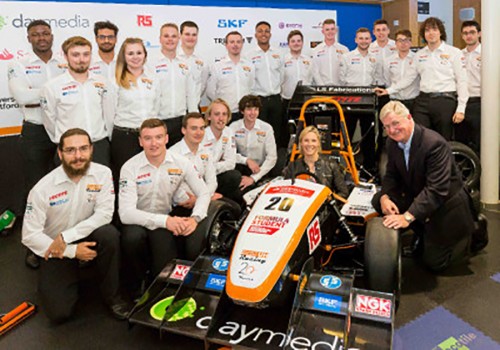 The University of Hertfordshire (UH Racing), a seasoned campaigner at the annual Formula Student educational motorsport competition, says it is using LOCTITE® products from primary sponsor Henkel “more than ever” in its 2017 car, largely due to an increase in the number of carbon fibre components.
Whisper it quietly, but due to some exciting advances in the car’s development, the UH Racing team is harboring hope that this year’s entry could provide the best-ever performance.
“We made a list of all the positives and negatives from last year’s Formula Student competition in order to identify priority areas for improvement,” explains Tristan Tissiman, Team Leader at UH Racing. “For instance, although we were a little disappointed with the power of last year’s Honda CBR500 engine, we wanted to keep it due to its high reliability. As a result, for the first time we’ve introduced a turbocharger, which has almost doubled our power output.”
A further difference relates to aerodynamics, in particular the method of manufacturing the many different carbon fibre composite components, where prepreg is now preferred to wet lay-up on the bodywork and wings (front, rear and side). The 2017 car also includes twin side pods on the wings.
Although UH Racing retains Henkel’s principal support, LOCTITE® products are also being used by a number of additional universities competing at Formula Student 2017, including the University of Bath, Oxford Brookes University, UCLAN University of Central Lancashire, University of Sheffield, University of Strathclyde and University of Sunderland. In all cases, technical guidance from Henkel UK is offered.